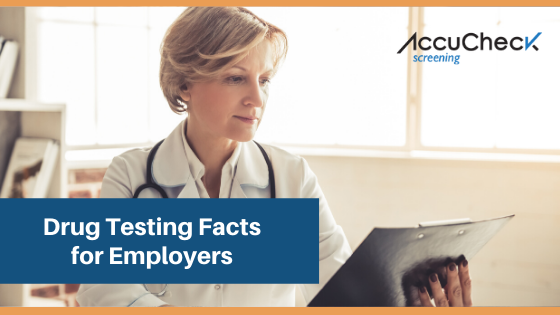 Whether you are looking to add drug and alcohol testing to your applicant screening process, or want to implement random drug testing for your staff, here are some drug testing facts you may need to know.

Each state has its own regulations when it comes to drug and alcohol testing. On top of that, the federal government has a separate set of regulations as well.

Here are some resources for employers looking to brush up on drug testing regulation:

“According to the National Drug-Free Workplace Alliance, 75 percent of the 17.5 million illicit drug users 18 and over are currently employed.” SHRM

In the past few years, workforce drug positivity has climbed by quite a bit. In fact, in 2018 it hit a 14-year high (according to the Quest Diagnostics Drug Testing Index). Other drug use trends include:

When it comes to urine testing for drug use, it’s imperative that you team up with an experienced and regulated laboratory that specializes in drug testing. Urine testing can detect a wide range of drugs including, but not limited to, amphetamines, barbiturates, cocaine, marijuana, ecstasy, meth, opiates, oxycodone, PCP and more. This testing detects any sort of drug use in the last 24 to 72 hours (depending on a few factors such as the drug, amount ingested, and the person’s biology).

As more states throughout the United States legalize marijuana, these numbers aren’t likely to go down anytime soon.

Even though Colorado has legalized marijuana for recreational use, the short and long-term side effects of this drug will absolutely make an impact on your workforce’s safety and productivity.

According to Quest Diagnostics:

Long-term effects may include brain development issues; breathing problems and higher risk of lung infections when smoked; increased heart rate, of concern to those predisposed to heart conditions; and worsening symptoms in those with schizophrenia.”

There are currently no restrictions in the State of Colorado in regards to an employer’s ability to drug test for marijuana usage. In fact, Quest includes testing for marijuana in more than 97.6% of their drug test panels.

Adding a drug-testing program to your business will assist in filtering out drug users and also deter drug use among your current staff. Drug testing is a vital part of the applicant screening process to help your business avoid risky, and costly, hires.

Properly and accurately screening your employees for drug use enables you to create a safer and more productive workplace environment that protects you, your employees and your clients and customers. We provide a versatile set of DOT and non-DOT drug screening services, including lab-based and on-site screenings. Find out more about Accucheck’s Drug & Alcohol Testing on our website: https://accucheckscreening.com/drug-alcohol-testing/